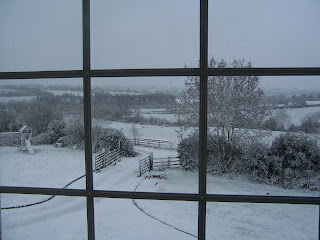 Yes, you heard me right -- we have had a good deal of snow this week!! We probably won't see this much stuff for another 20 years so I spent some time taking photos and encouraging the kids to play away in it.

The first photo is around 12:00 on Monday, after which I received a phone call to pick up the kiddos at school. The second picture was taken later in the afternoon, it was piling up fast. Now, just so that you understand how serious this could have been, we don't have snow plows or trucks for spreading salt or grit!!!!! The council grits the roads with sand but mostly the main roads which leaves most of the poplulation stranded in the coutryside. The backroads were frightening, really frightening!

My children don't really remember snow, the oldest kinda does or so he says. They were so overjoyed that they could actually play in the snow before it melted and when school was called off for Tuesday, holy cow you though we had won the lottery!!!

I would like to add however that it was not fun going out and bottlefeeding some of our lambs. Some of the little creatures had sought shelter in the ditch, this meant that FarmerBoy and I as well as the kids had to climb through the briars looking for them. Two of the more delicate lambs died. We speculate that they just weren't strong enough for the cold and wind. By right they should have been in the sheds but FarmerBoy has been helping out other family members and was not able to get home before dark to move them in. 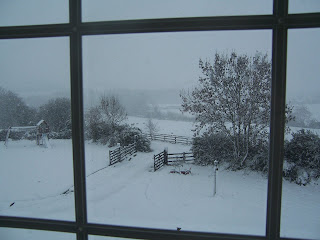 The next morning was gorgeous, bright and sunny and my three darlings pulled out a sled and plastic bags (Feed Bags) and set about hitting the slopes on one of our fields 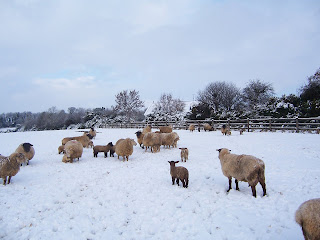 I am hoping to get some quilting done this weekend, I have been working on one of my old projects and am planning on getting some BOMs done. I also want to get one of my quilts pinned for machine quilting. So many things to do and so little time!!!

I have been a very bad blogger the past two weeks, I have to get back to doing this more regularly. Maybe I should keep a small notebook and jot down ideas for blog posts. I often find that I don't know what to blog about. Some weeks are filled with family and farm activity and then some weeks I get to do alot of quilting!!!

I have more great photos to share with you which I will do in the coming days!!

Bye everyone and keep smiling!!!! 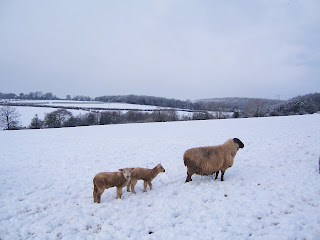 Looks like you've got the same white stuff as we did! Enjoy it while it last...thought personally we've had it for a week now and I've had enough! :o)

I posted a pic of the snow on Horn Head which overlooks Dunfanaghy. It was pretty, but it made for slick roads.
I really enjoyed your pics of the snow and the sheep.
Micki

Anne Marie
An American living, quilting and raising three gorgeous children in Co. Wexford Ireland. My DH and I are fortunate to be living on a beautiful sheep farm, running a B&B and operating a quilt shop, all the while keeping our sense of humor!

Blogs I love to read